Eeva-Mari Haikala's works explore the terrain between performance, video art, and photography. The exhibition Elle se sentait profondément honteuse is, indeed, an attempt to give an answer to the question of when a work is to be seen as performance art and when it is a work of photography or video art. Haikala's works suggest that we can refer to a work of art as performance, for example, when the presence of the artist, their body or their experience, is an essential part of the photographic or video piece.

Shot on Super 8 film, Eeva-Mari Haikala's new series Elle sentait profondément honteuse ("She felt a deep sense of shame") has her return to the methods and techniques she used in the series Tableaux Vivants (2006): put the camera on a stand, start the film rolling, and settle in front of the camera for the duration of the roll of film, that is, about three minutes. In her new series of works, Haikala raises the issue of the artist exposing her body to the gaze of others, as a particular characteristic of performance and live art. 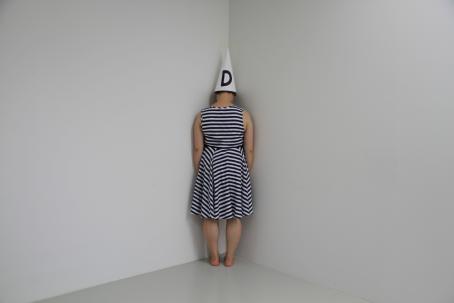