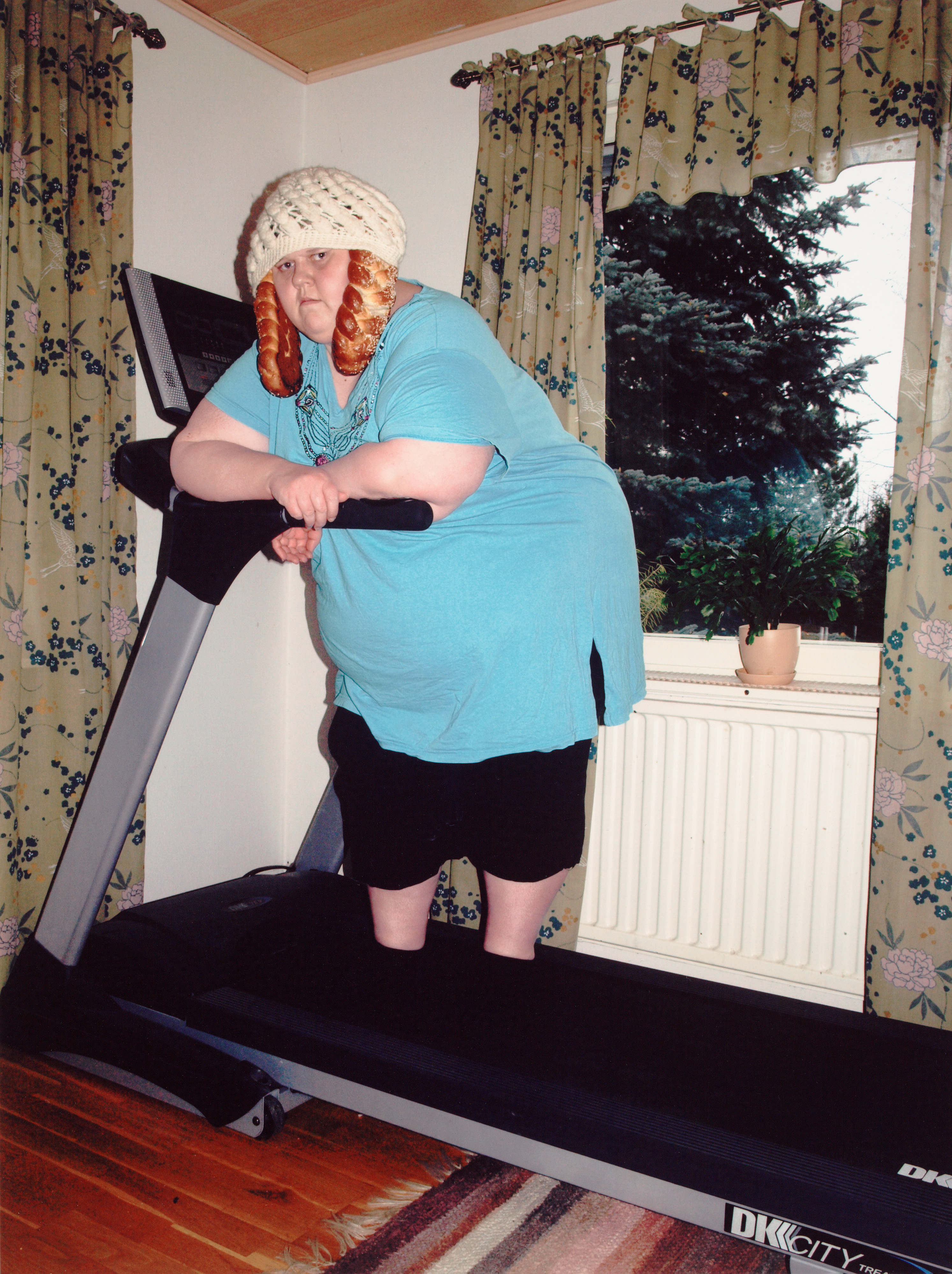 A large, young woman is standing on a treadmill located in the corner of a room, leaning on the handrail and looking directly at you. She is not exercising, but she has turned sideways on the conveyor belt. Behind her, there is a window through which tall spruce trees can be seen. She is wearing clothes that themselves look elastic and suitable for exercising: black shorts and a long, loose-fitting turquoise T-shirt. Clad in black socks, her feet barely stand out against the black conveyor belt of the treadmill; it is as if they are sinking in its stationary stream. She is also wearing a white, knitted cap, from under which braids fall down to her shoulders. Except that they are not braids of hair but two loaves of braided sweet bread.

You cannot quite make out the look on her face. It is a blank face, but maybe there is a hint of irritation? Determination? Resignation? Sulkiness? Anxiety?

A blank stare is a recurring feature in Iiu Susiraja’s works. She photographs herself; the character is a performance, part truth, part play. She has said that, when photographing herself, her aim is to reach a state in which she is not posing. It is surprisingly difficult. Her face is still, as is her body, in a somewhat expressionless position.

The title of the work is Training, and it is part of the series Good Behaviour. Exercising is relevant, as taking care of your physical fitness constitutes good behaviour. This is not to say that it is necessarily pleasant.

Maybe putting loaves of braided sweet bread, instead of hair, under a knitted cap is good behaviour in some context? And if so, what kind of context would that be? Maybe it is the internal logic of a village idiot, because Susiraja likes village idiots. Maybe the combination of sweet bread and a knitted cap form a kind of protective helmet against an excessively healthy lifestyle?

Braided sweet bread features in various roles in other works by Susiraja. The humorous, but not exactly well-behaved juxtaposition of objects or foodstuffs with Susiraja’s own body is a key element in her art. Susiraja has said that she uses this method to distance herself from difficult issues. She says that she wants to use her works to say ‘screw them’, but on the other hand, she also wants to convey to the viewer the same emotion that she herself has experienced. Discomfort and frustration are certainly conveyed, but perhaps the viewer also experiences confusion, compassion or vicarious embarrassment, empowerment, relief and joy.

Iiu Susiraja’s art has also gained international acclaim. For example, last year, her works were shown at exhibitions in New York and Los Angeles. Next year, she will have an exhibition at the Museum of Contemporary Art Kiasma in Helsinki. Her first museum exhibition was Everyday Life, Style: 100% at the Finnish Museum of Photography in 2010.

Much has been written about Susiraja’s works in both Finnish- and English-language media. Her works have been seen to challenge the traditional view of women and the selfie culture of social media. What still seems quite radical is a woman photographing herself without in any way seeking to create an impression of beauty – on the contrary, embracing ugliness. In Finnish contemporary art, female ugliness has, in addition to Susiraja, been explored by at least Stiina Saaristo, who similarly acts as a model in her own photographs and sets the mood of her works using objects. Another representation of discomfort, experiencing the female [M1] [s2] body as grotesque, is Heli Rekula’s work Hyperventilation, which Susiraja says has inspired her. The art historian Stefanie Snider thinks there is political power in Susiraja’s works, which arises from how a fat body is presented: as flouting the norms, as not being an object of desire, nor of ridicule or disapproval, but as a sarcastic and honest subject that illustrates the absurdity inherent in everyday objects and practices.

However, there is much more to Susiraja’s works than challenging norms related to women and beauty. They are a celebration of village idiocy, the subconscious, daring, strangeness and absurdity – and maybe of honest Finnishness that accepts occasional gloominess. Eeva Halkosaari, who wrote her bachelor’s thesis in art history on Susiraja, says that, in her works, Susiraja does not just depict a woman, but “Finnish” existence, slowness and greyness. Susiraja’s persona has also been likened to characters from Aki Kaurismäki’s films. Maybe there is something especially identifiable in the mood from a Finnish perspective. Sulky Finns may be a cliché, but the sulking in Susiraja’s images is not contagious; on the contrary, it will bring a smile to a fellow Finn’s lips.

Snider, Stefanie: On the Limitations of the Rhetoric of Beauty: Embracing Ugliness in Contemporary Fat Visual Representations. Kirjassa On the Politics of Ugliness (toim. Sara Rodrigues & Ela Przybylo), 2018.