To see and be seen 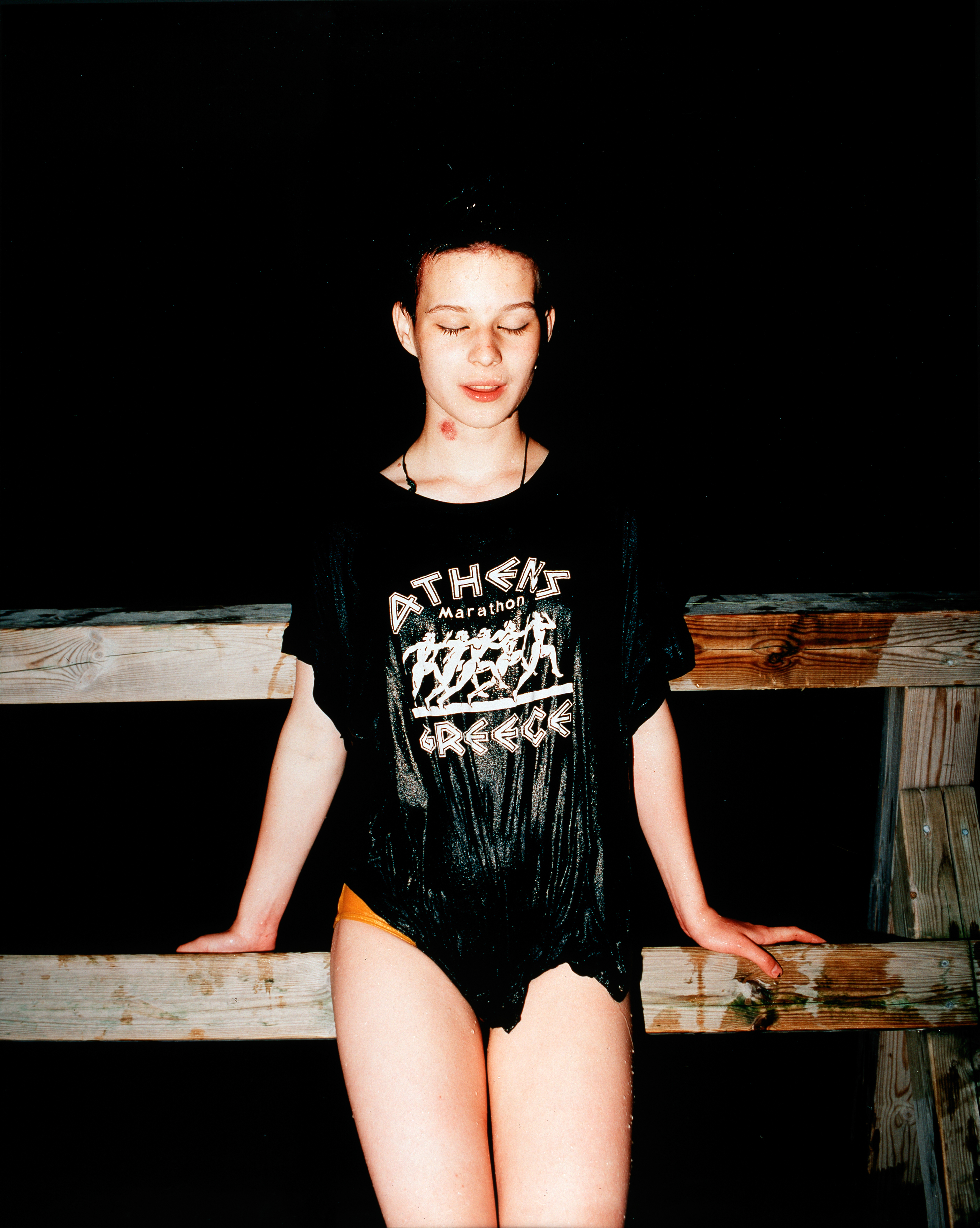 A young girl is leaning on a wooden railing against a dark background. She’s wearing mustard knickers and a dripping wet, black T-shirt. The girl is posing with her eyes closed, as if to protect herself from the over-bright flash or the gaze of the camera. The expression on her face is calm and serene. Her pale skin glows clear, fleshy and flawless, except for a red mark on her neck.

The picture was taken on a jetty in the Kaivopuisto park on a warm summer night, when young people were celebrating the end of the school year and the start of the summer holidays. Moments earlier, the girl had swum in the sea, to the islet opposite and back. When she got out of the water, suddenly there was a photographer waiting for her on the jetty, asking if he could take her photograph.

The photograph of the girl in a wet T-shirt is part of the iconic Young Heroes series that Jouko Lehtola photographed in the mid-1990s, when he toured Finnish rock festivals, dance pavilions and clubs over two summers. Lehtola, who had previously taken photographs of rock stars for a living, now turned the camera away from the idols, towards the young audience and the fringes of the venues. Captured on film were images taken at the edges of forests, campsites and on beaches, where young people spent their free time in post-recession Finland. Young Heroes portrays teenage emotions and activities in the raw. The photographs show the revelling, drunken, and pimple-faced youths with their uninhibited poses as they are, with only defiance or closed eyes to protect them.

The moment on the jetty in Kaivopuisto has been captured with equal sincerity. I cannot but marvel at the courage and mutual trust demonstrated by both the photographer capturing the scene and the subject letting herself be photographed. By all accounts, Lehtola had a special sensitivity towards the people he met – truly seeing the subjects of his photographs, and negotiating and creating a connection with them. The analogue camera, hand-held flash and large-format negative made the shoot slow and a little raw, but on the other hand, the rawness helped to calm the atmosphere. Lehtola took most of his photographs at night or at sunset. He writes:

“It’s a magical and very warm moment, capturing the transition from day to night, and all the rites that are involved. People preparing themselves, waiting for the darkness to fall, a certain excitement, no one knowing or seeing what is happening.”

I imagine there must have been a similar feeling of anticipation in the air at the school graduation ceremony. Young people are celebrating the first night of the summer, kilometres away from their school and the adults. They can put aside thoughts of obligations and difficult choices for a moment. Anything can happen. The girl in the photograph comes across as direct and genuine. She didn’t really have to worry about how the image would appear or where it would end up. On the other hand, this was a time when people were not used to interacting with the camera, a time before the phone camera culture. It probably felt like a safe choice for her to keep her eyes closed. At least I am not disclosing everything about myself.

The Young Heroes set of works was first shown at the Old Student House in Helsinki in November 1996 as a series of 70 densely exhibited, huge colour prints. The highly popular exhibition was visited especially by the peers and friends of the young people depicted. The viewers were impressed and proud – finally, we have been seen. Anyone who was a teenager in the 1990s will find the world depicted by Lehtola very familiar. Although time has coated the images with nostalgia, they vividly bring back the conflicts associated with being a teenager: the defiance and vulnerability, the passion and melancholy, and the belonging and detachment.

Years later, the story of each youth featured in the photographs has been published, one at a time. In the current affairs programme broadcast by YLE (Finnish Broadcasting Company), Jos: Jouko Lehtolan valokuvat (‘If: Photographs by Jouko Lehtola’, 2004), Lehtola met some of his models eight to nine years after the photographs were taken. In 2014, the newspaper Helsingin Sanomat wrote a feature on three of the youths. The story of the girl in a wet T-shirt can be read on the blog Lehtolan tyttö (‘Lehtola’s girl’). Time and distance have taught her to be gentle towards her young self:

“- - the photograph was at Lehtola’s exhibition. I didn’t go to see it, as I was afraid that someone would recognise me. The picture seemed improper. Only later, I thought that the picture is beautiful, and a valuable document of the period. That it is awesome that Jouko has appreciated a young creature like that.”

Jouko Lehtola (1963–2010) studied painting at the Free Art School and photography at the photography department of the University of Art and Design Helsinki in the 1980s and 1990s. In addition to the series of photographs documenting youth culture, Young Heroes, Urban Youth and Marked Skin, he worked on more serious social topics such as heroin-related deaths and domestic violence. Today, the legacy of Lehtola, who died of cancer in 2010, is managed by the Jouko Lehtola Foundation.