Maamme (Our Land) is a video work in which non-native Finnish citizens sing Maamme, the national anthem of Finland.

Maamme (Our Land) highlights Finland’s multiculturality and emphasises how the concepts and definitions of nationality are in a constant state of flux. The people who appear in the work were not born in Finland, nor do they have Finnish roots, but they have all sought and been granted Finnish citizenship. The work brings together these new Finnish citizens to sing the national anthem of their adopted country, offering a more inclusive view of Finland and Finnishness.

Finland's national anthem was originally written in Swedish, and the music was composed by Fredrik Pacius, a German immigrant. The anthem is also shared with Estonia and the Livonians. In the video, the Maamme is also sung in Swedish (Vårt Land) as many immigrants speak Swedish – Finland’s second official language. The fact that the emotionally and politically charged national anthem of Finland was composed by an immigrant, is used as the anthem of other countries, and is sung in several languages, challenges simplistic ideas of nationality. The work can be seen as a comment on the ongoing debates in Finland concerning nationality and national identities.

In the multichannel installation version of the work, each singer appears on an individual screen. In the exhibition space, a number of screens are arranged together, with the singers on the various screens forming a multicultural Finnish choir.

The exhibition is supported by: Genelec, the CARTES Centre of Art and Technology Espoo, AVEK (the Promotion Centre for Audiovisual Culture), Svenska kulturfonden (the Swedish Cultural Foundation in Finland), Stiftelsen Tre Smeder, the Arts Council of Finland, and William Thurings stiftelse. 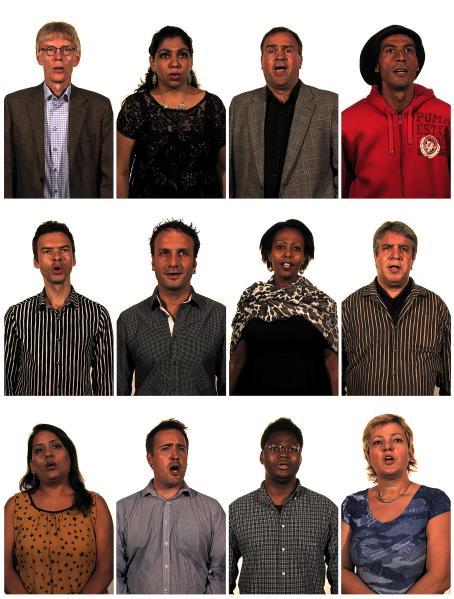