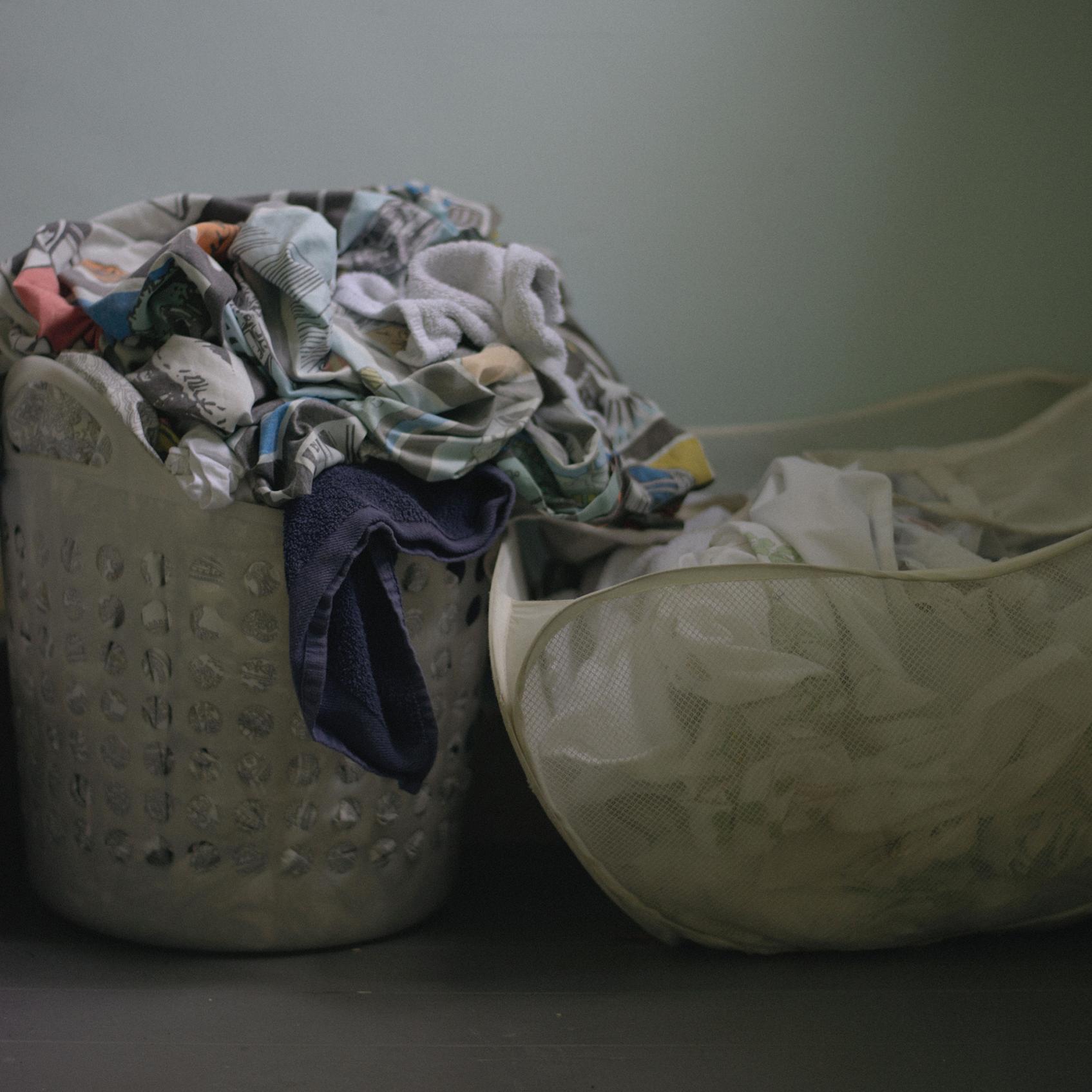 ”Enough already. When people try to be cheerful about social distancing and working from home, noting that William Shakespeare and Isaac Newton did some of their best work while England was ravaged by the plague, there is an obvious response: Neither of them had child-care responsibilities.”

- Helen Lewis in her article “The Coronavirus is a disaster for Feminism”, published in The Atlantic, March 2020

Photographer Clare Gallagher's work gives poetic expression to mundane subjects such as piles of laundry, emptied lunch boxes, and scraps of food. The photographs are made even more fascinating by their beautiful presentation: the everyday items are veiled with a light, dreamlike haze. And yet, there they are: formless messiness and unfinished chores.

The covid-19 spring of 2020 caused chaos to erupt in the lives of many parents, in the form of untidiness and laundry piled up in the corners. Ordinary work days became endless marathons of professional duties, lunchtime meal preparation, and childcare. I was one of these parents, whose lives were turned upside down. I dreamed of taking my child to daycare, but somehow I accepted the unusual havoc — for too long, as a painful case of stress-related shingles bloomed on my hips as a result.

That spring there was always a book on my desk related to the coming exhibition in our Project Space — Gallagher's self-published collection, The Second Shift. The book and the series of the same name make visible that aspect of life which has gained relevance and political significance due to the pandemic: that second round of work, following a day at an actual paying job, that comprises everyday housework.

Because I live in FInland, I was able to take my child to a daycare center when my energy failed me. Various media outlets reported that things were much worse elsewhere in the world. For instance, Christina Rexrode and Lauren Weber published an article in the Wall Street Journal (later also released through Helsingin Sanomat) that tackled the issue of childcare in the covid-era United States. The Atlantic wrote in spring 2020 about the serious impact of the pandemic on social equality and feminism.

Gallagher took the photographs presented in The Second Shift years before covid, as her now teenage children were still young. Her series was born of the realization and the disappointment of discovering that equality in the home was something quite different from what she was used to in school and in professional life. Many mothers of young children in similar situations identified with these thoughts. The Second Shift visualizes the bustling construction site that is a living, functioning home. Gallagher herself calls the series of photographs a "quietly angry" work.

Gallagher writes: ”I am a lecturer, artist, researcher and mother of two teenaged sons. I started researching home in the late 2000s, as the exhaustion and delirium of mothering babies and toddlers gave way to bewilderment and frustration at the gendering of my time and opportunities in ways I had not been prepared for. In my mixed-gender state school, girls went on to study engineering, medicine and law in the same proportions as the boys did. Thinking the feminist battle had been won in the 1970s, we set out with expectations of equality. Where did all the promises of parity go? Of shared parenting? If we had still managed to retain the belief in gender equality in the workforce, parenthood rapidly revealed it to be an illusion.”

The term that gives her series its name is found in the title of a book by sociologist Arlie Hochschild. In "The Second Shift: Working Parents and the Revolution at Home" (1989), Hochschild demonstrated how the "first shift" faced by working women had no effect on the division of labor during their "second shift" back at home.

One might think that in the year 2020, men and women are basically equal at home and in the family, at least in Finland. However, figures from Statistics Finland and 2017's Gender Equality Barometer from the Ministry of Social Affairs and Health show that while the gender gap in labor distribution has shrunk somewhat, home chores stubbornly remain mainly the purview of the woman of the house. Housework and child rearing are still the domain of mothers the world over, so no wonder the pandemic affects them and even their ability to continue working most of all. On the other hand, some institutions hold that covid-19's increase in remote work could boost equality at home.

Clare Gallagher's photographs show dirty Tupperware containers and heaps of laundry desperately in need of a wash. The works shine a light on this other aspect of life in a family with children, which isn't only comprised of slaving away at domestic tasks, but at best a sense of joy for the existence of the children themselves. The lighting, the bare skin of the children, and the briefly fleeting moments captured in Gallagher's images transport me into similarly joyful past experiences of my own. In my memories, my child and I are taking an early morning walk during that first Covid Spring, as the sun casts its light magically on our back yard. We are alone, just the two of us, right then, on the cusp of a new moment.

Working Parents Are Hitting Their Coronavirus Breaking Point—and Paying for It - WSJ, 15.8.2020

Gender Equality Barometer 2017. Publications of the Ministry of Social Affairs and Health 8/2018. Helsinki.

Statistical data on women's and men's time use, housework, work and being alone. Time use and free time | Statistics Finland (tilastokeskus.fi)